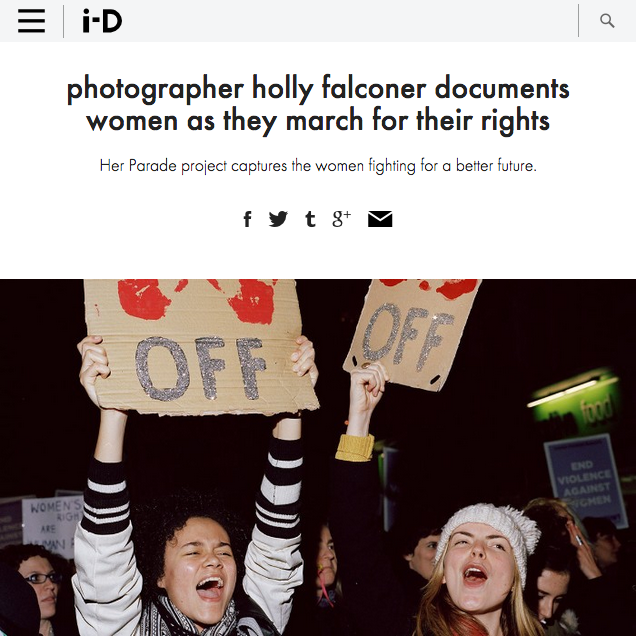 i-D magazine recently interviewed me about my Parade project. You can read the article here.

When she shoots fashion, Holly Falconer’s models appear as strong and interesting characters – people we’d like to be friends with rather than dead-eyed lookbook mannequins. She also shoots documentary projects, is a huge fan of Christopher Kane’s new collection, meeting strangers, and photographing the things that everybody else ignores. Back in 2008, along with a few friends, she started up The Most Cake, a website and big night out for LGBT women in London. Finding her work both beautiful and inspiring, i-D caught up with Holly to discuss Parade, an on-going project about why women march in the 21st century. As she goes on to tell us, you can retweet a cause thousands of times, but there’s nothing more powerful than participating in it.

I’m a photographer, mainly shooting portraits, fashion and documentary work. I do it because it’s the best way I know of capturing the magic and idiocy of modern life. Britain is a great place to do that. It can be a kind of wonderland – a place overflowing with potential and fresh ideas, but it’s always underscored by our bleak sense of humour and ruthless weather. That dichotomy is something I love to show in my pictures – whether I’m shooting a protest or a fashion editorial I try to shoot everything with a half-optimistic, half-questioning eye.

What does the word activism mean to you?

I think on a basic level, it’s never being complacent about anything. You have to believe that things can change and that you can turn your beliefs into action. We’re so lucky now, as activism has been given a helping hand via viral campaigns and websites where you can meet other people who share your views. A lot of people who never had a voice are gaining one…